Of Aristophanes’ eleven extant comedies, The Knights is perhaps his most overtly political in terms of contemporary historical references and the general content of the comic myth, which focuses on the Athenian political scene. In it, the playwright puts populism and demagogy in the stocks, training his sights on his era’s most notorious exponent of those dark arts, Cleon. The politician, who rose to prominence after the death of Pericles and the decisive victory of the Athenians over the Spartans at the Battle of Pylos in 425 BCE, is presented as the new favourite servant of Demos – a personification of the Athenian system of government – under the name Paphlagonian.

The play begins with Demos’ two oldest slaves – representing the famous politicians and generals Demosthenes and Nicias – lamenting their ill-treatment at the hands of their violent and cunning overseer, the leather merchant Paphlagon. To console themselves, they get drunk and steal a set of oracles from under his nose while he is asleep. The oracles reveal that Paphlagon will be supplanted by someone far worse, a sausage-seller, who will receive all the favours and privileges that Demos currently bestows on him.

Sure enough, the man to whom the oracles refer, a crude and illiterate travelling sausage-seller, suddenly appears. His cunning, craftiness, vulgarity and low morality will be key qualifications for his political advancement. As the two slaves say, sausages and politics are not so very different, as in both cases it’s best not to know what goes into them. Thus, the perplexed sausage-seller, with the support of the Knights (the representatives of the highest social and economic class), who are the play’s Chorus, is persuaded that he is destined to challenge and defeat the dreadful Paphlagon and to rule the city. After a series of trials, the two opponents face each other in a contest of flattery, oracle reading and cooking, with Demos himself as the judge. The sausage-seller triumphs in every round, ousts the defeated Paphlagon from his position, and causes Demos to undergo a miraculous rejuvenation, so that he regains the greatness he had last enjoyed during the glorious era of the Persian Wars.

At a time when Cleon was at the height of his popularity, Aristophanes launched a relentless attack against him, satirising the new political ethics and corruption that characterised the relationship between democratic institutions and state bodies on the one hand (the senate, the council, and the courts) and political leaders on the other, who attempted to secure their own approval and popular appeal through flattery and fraud, putting their personal interests above any other consideration, including the common good.

The Knights was performed at the Lenaia Festival in 424 BCE, where it won first prize. It was the first time that Aristophanes had directed one of his own plays.

At the National Theatre of Greece, The Knights was staged in 1968 and 1976, in a production directed by Alexis Solomos, and in 1991, directed by Kostas Bakas.

Nobles or followers? Invaders or tourists? Victims or aggressors? The Knights are an enigma, but it is a play that is now more topical than ever, in this post-truth era of fake news and virtual reality.

It is a comedy that reaches beyond Aristophanes’ own time into a future only now taking shape. The backdrop to it is made up of a host of rabble-rousing politicians, a disoriented democracy, indifference to the well-being of the body politic, slander, poverty, a war that looks as if it will never end, and the fear of a new outbreak of an epidemic that has already left thousands dead.

With their warlike appearance, the Knights conspire with Aristophanes to topple those in power in a frightened and blighted city. In the battle between the two toxic politicians, the playwright presents humanity as a necessary element of power which is trampled beneath the extreme methods employed by his protagonists.

With Greek and English surtitles 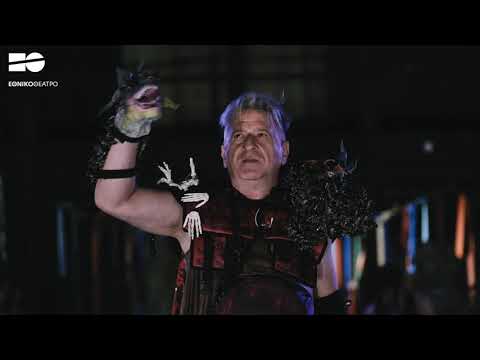 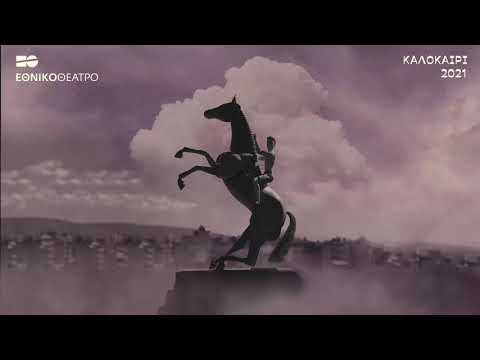 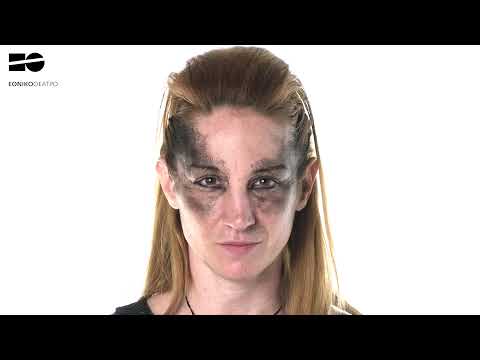 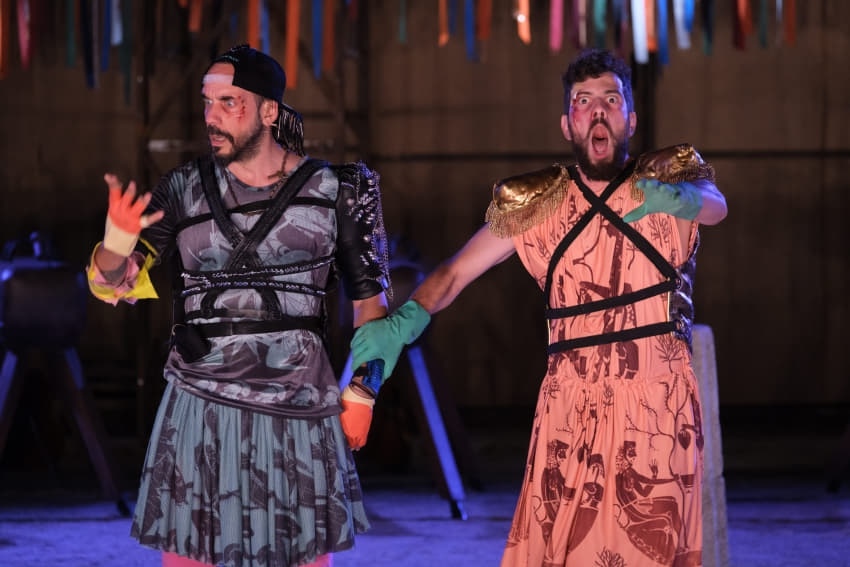 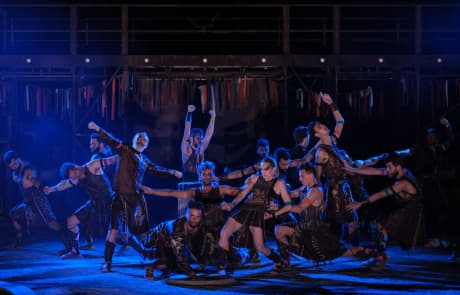 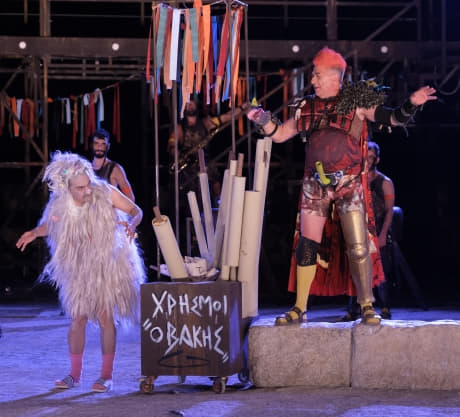 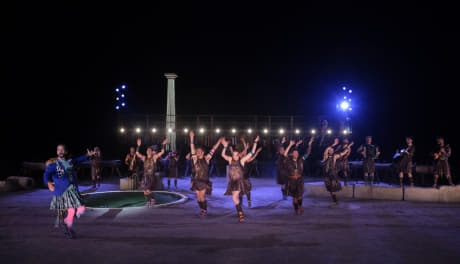 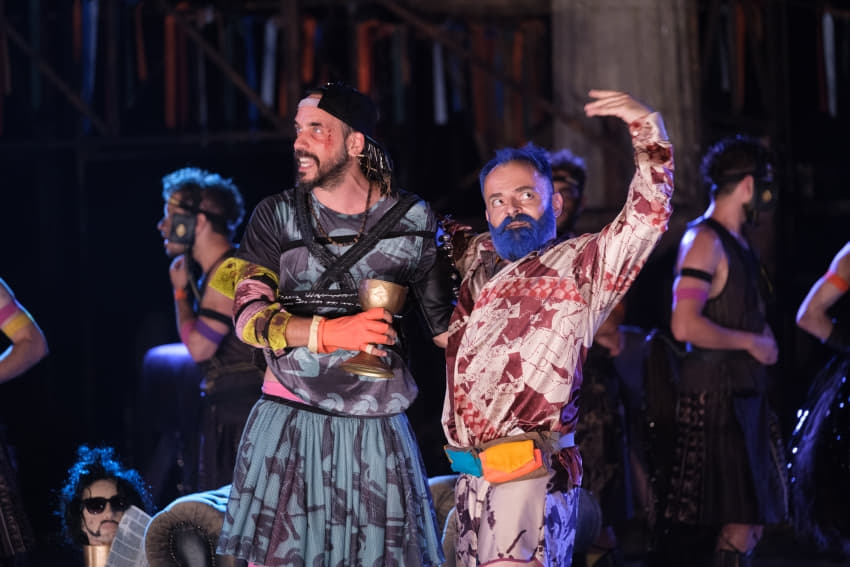 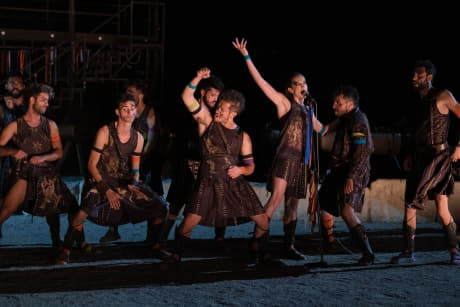 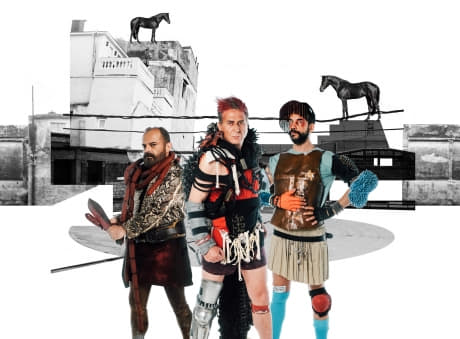 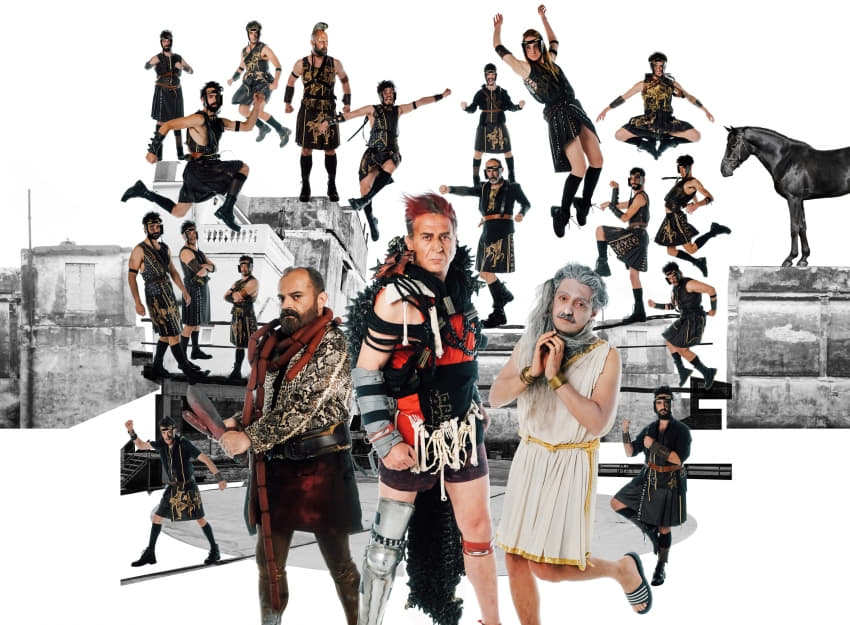 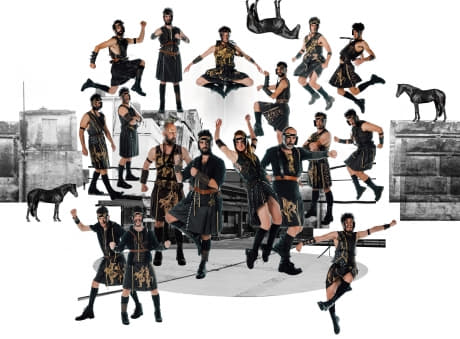 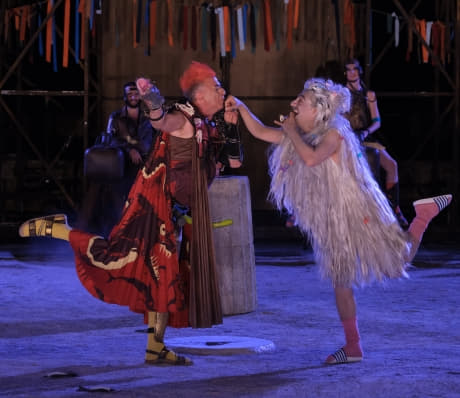 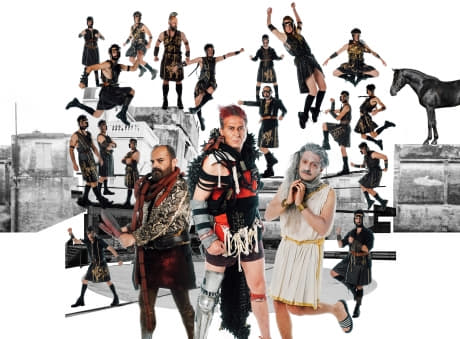