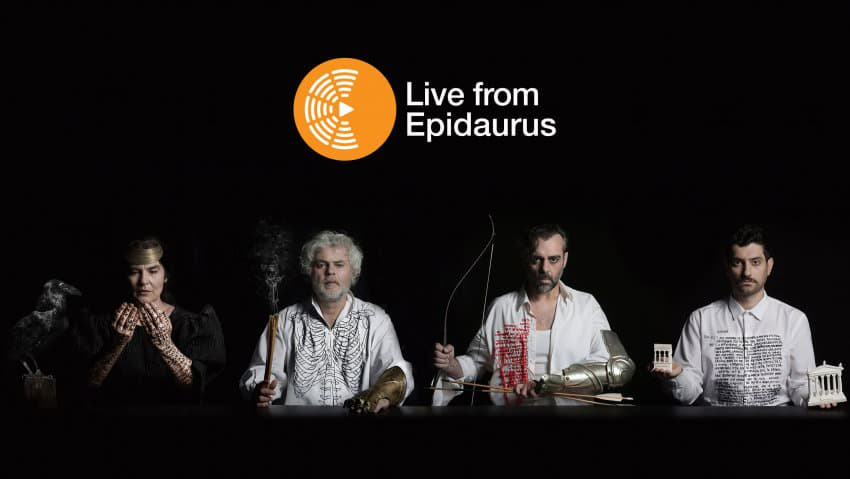 Live from Epidaurus: For the first time ever a live ancient Greek drama performance streamed globally from the ancient theater of Epidaurus

In Greek with English subtitles

For the first time ever, an ancient Greek drama performance will be streamed live, from the ancient theater of Epidaurus, often called “the world’s most beautiful theater.”

As countries around the world are still exploring ways to restart theater in the post-COVID era, and as most festivals across Europe have been unfortunately canceled this year, the Athens and Epidaurus Festival will still take place, albeit in a condensed form, titled Fragment, adhering to the strictest safety measures.

Within the framework of this year’s Festival, the National Theatre of Greece with the support of the Greek Ministry of Culture and Sports will present to a global audience a production of Aeschylus’ drama The Persians, commemorating the 25th centennial of the Battle of Salamis. It is the first time that a major ancient Greek drama production is being livestreamed, and it is also the first time that any event is being livestreamed from Epidaurus.

On this occasion, Greek Prime Minister Kyriakos Mitsotakis stated: “As humanity is still challenged by the COVID-19 pandemic, the first ever live streaming of an ancient Greek drama performance from the ancient theater of Epidaurus is, Ι believe, a pivotal moment. This performance of Aeschylus' The Persians, on July 25, comes at a critical juncture to underscore the universality of the principles that led to the construction of the Ancient Theater of Epidaurus, a UNESCO World Heritage site, 2300 years ago. The Persians, Aeschylus’ most important antiwar play, dramatizes the naval battle of Salamis, one of the most decisive battles in the history of humanity, constantly recalling the timeless values of democracy and freedom, as well as the meaning of Ancient Greek metron and moderation.”

Lina Mendoni, Minister of Culture and Sports stated, “The Ministry of Culture and Sports’ goal has been to prevent COVID-19 from leaving Greece without cultural events this summer, from leaving artists without employment opportunities and from leaving local communities without additional revenues. The Athens and Epidaurus Festival and the National Theatre of Greece, two major cultural institutions supervised by the Ministry, share our beliefs and adjusted their programming in the new reality, in a creative manner.

The theater of Epidaurus, work of architect Polycleitus the Younger, is connected to the born of theater as well as healing, as it was part of a holy site dedicated to Asclepius, god of medicine and father of goddess Hygeia who personifies health. Music and dramatic contests hosted at this theater were part of the patients’ therapy, as they prayed to the god for their healing. It is therefore quite fitting that in 2020, when the entire planet is being tried by COVID-19, that Greece symbolically and literally transmits globally an ancient drama performance from the holiest of places, to heal the wounds that were inflicted by this pandemic. This summer Greece sends its own message around the world that art can heal body and soul, as ancient Greek philosophers and doctors taught us. This summer, we keep safe while still enjoying art.”

As Dimitris Lignadis, Director of The Persians and Artistic Director of the National Theatre of Greece notes, “Amidst an enforced lockdown, art, and the theater once more emerged as vital human needs, as a place of refuge. The National Theatre of Greece, with the support of the Greek Ministry of Culture and Sports, invites the entire planet to the most beautiful theater in the world, at Ancient Epidaurus, to share and participate – even if only online – in our production of The Persians; in a ritual that takes us back to the past, reminding us of the essence and the core of existence, which is at the same time a bridge between people and cultures. Culture belongs to all humanity and humanity has the right to unity, even when conditions do not allow it.”

The play will be streamed live at 21.00 Athens time (GMT 2), in partnership with Google Greece. It will be available worldwide except Greece, exclusively through the YouTube platform, free of charge, although donations will be welcomed. All proceeds will benefit the National Theatre and Greek actors impacted by the COVID-19 pandemic. Google will host the livestreaming and provide technical support as well as major free promotion across YouTube regarding the livestreaming event.

Peggy Antonakou, General Manager Southeast Europe for Google, stated “For the first time, YouTube will give the opportunity to an international audience, to virtually travel to the home of the theater and to the magical landscape of Epidaurus and to watch live, via live stream, the Persians by Aeschylus – one of the leading ancient Greek tragedies. And while it is true that nothing can compare with the physical presence in such a sacred place like Epidaurus, the fact that, in these adverse conditions we can share a taste of our cultural heritage and unparalleled Greek experience with people who would like to visit our country but are currently undergoing restrictions, is really important.”

The Persians (472 BCE) is the oldest ancient Greek drama that has survived in full to present day. It is also a historical record of the most important battle of the second Persian invasion of Greece (and one of the most crucial conflicts in human history), the Battle of Salamis, in which the play’s author, Aeschylus, took part.

In Susa, the Persian capital, the old men who loyally guard the glorious palaces of Xerxes are awaiting news of their army’s campaign against the Greeks and are apprehensive about the outcome of the expedition.

The impressive size of the Persian army, the fame of its generals, and the God-given power of their king do nothing to alleviate the fear of the elders, who know all too well how the web of Ate, the goddess of folly, can entrap men and lead them to their ruin.

Their trepidation reaches its peak when Queen Atossa, the mother of the campaign’s commander, Xerxes, and widow of the deceased King Darius, recounts an ominous dream in which Xerxes attempts to yoke a Greek woman and an Asian woman to his chariot. The Greek woman breaks free, throwing the king to the ground.

The arrival of an out-of-breath messenger confirms their worst premonitions: the Persian army has been annihilated; the Greeks have won.

A detailed account of the rout concludes with a long description of the Battle of Salamis, the flight of Xerxes, and the ill fortune of the remaining army that attempted to return by land.

Darius, the symbol of former glory, is summoned from Hades by a necromantic ritual and the grief of the Persians. According to the dead king, the blame for the disaster lies with the arrogant Xerxes, whose hubris defies nature and the gods. The arrival of the ragged and vanquished king, in stark contrast to the magnificent presence of Darius, completes the image of absolute defeat. Praise for the achievements of the past is transformed into wailing and lamentation for the present, crowning the suffering in the once-splendid palace of the Persians.

The ancient theater of Epidaurus

The Theatre of the Asclepeion of Epidaurus, built on the northwest slope of Mount Cynortion in the Peloponnese, is the consummate form of the architectural experience of the ancient world, combining elegance with perfect acoustics, and is the best preserved ancient theatre in Greece. It was built in the late 4th or early 3rd century BCE by architect Polycleitus the Younger to host the music, singing and dramatic contests involved in the worship of god of medicine, Asclepius. Attendance was an integral part of the treatment of patients, as the ancient Greeks viewed the nurturing and cultivation of the soul and spiritual development as inherent to bodily health.

The harmony of the theatre is due to its unique design, based on a regular pentagonal orchestra (the part of the theatre where performances took place), as well as the use of three centres in the plan of the curved cavea, where the spectators sat. Specifically, the cavea originally comprised 34 rows of seats, holding between 6000 and 8000 spectators, divided into 12 cunei (wedge-shaped sections) and 13 staircases, radiating outwards from the corners of a notional 20-sided polygon in the orchestra. The seats in the first row were for officials and were distinguished by being made from limestone and having backs. In the mid-2nd century BCE, the cavea was extended and its capacity increased to 13,000 or 14,000 spectators. The orchestra is 20 metres in diameter, with the thymele, the base of an altar of Dionysus, at its centre.

The theatre came to light during excavations by Panagis Kavvadias from 1881 to 1883. Since then, its continuous care by the Greek Ministry of Culture and Sports has aimed to repair damage from natural causes and use.

After centuries of silence, ancient drama was once again heard at Epidaurus in 1938, when the National Theatre of Greece (performed Dimitris Rondiris’ production of Sophocles’ Electra, starring Greek Academy Award winner Katina Paxinou and Eleni Papadaki. Regular performances of ancient drama began in 1954, while in the following year, the Epidaurus Festival was inaugurated as an annual event for the presentation of ancient drama with a performance of Euripides’ Hippolytus.

with the support of 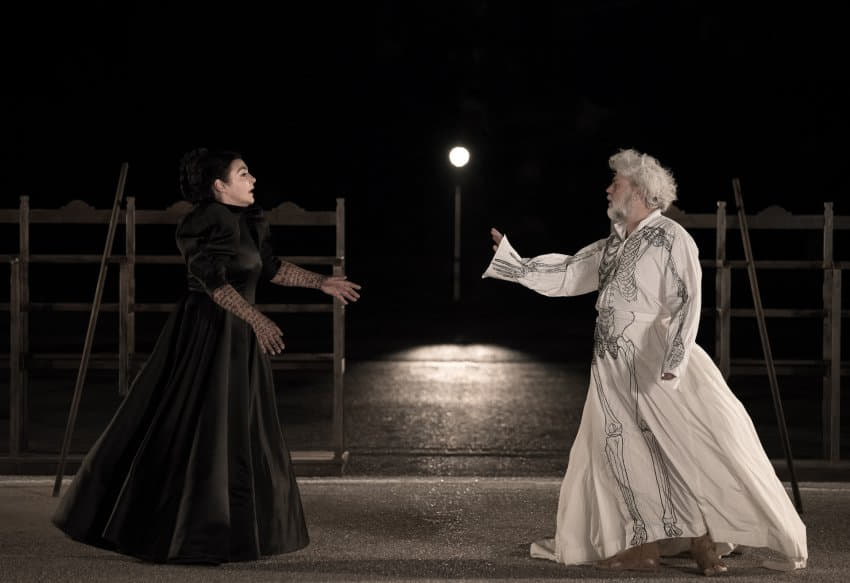 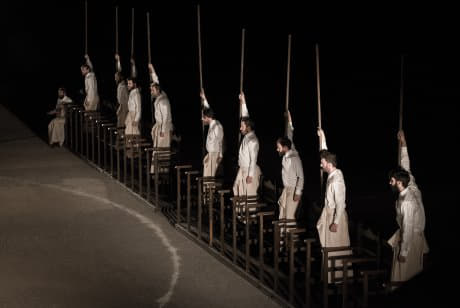